What are digital signs? 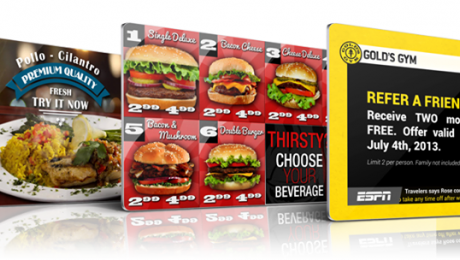 What is Digital Signage?

Digital signs are like having your own TV station to advertise to your customers inside your place of business.

Digital Signs are primarily used to communicate sales, promotions, and help up-sell customers on the establishments various products and services. They act as a modern day sales person. Consumers don’t mind watching a screen to learn about new products and promotions and in fact most find it quite enjoyable. They also serve to increase marketing compliance for many organizations such as banks and reduce printing costs.

Digital signs are not a TV or picture slide show. They are something far more unique that. Digital signs are referred to as Social Television most frequently. This newer form of media is a remote controlled distribution of media across a network of displays. It is most often found in high traffic areas with larger dwell times. You commonly see them at public venues or at point-of-purchase. Signarama Troy | Metro Detroit’s Digital Signage System can play most any file type and even do really cool things like integrate with live TV or live updates from your Facebook wall.  If you can dream it, our talented staff of developers and designers can do it.

The only thing that matters is that it does the job it sets out to do. Here are a few numbers that may grab your attention and prove the effectiveness of digital signs. 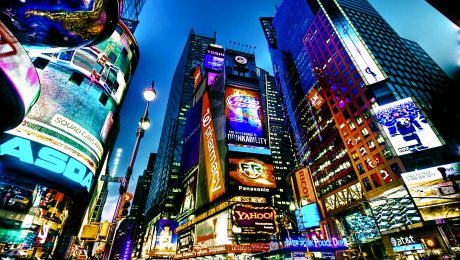 New York City is the most photographed city in the world, with Times Square being the main focus of the lens. The signs of Times Square are prevalent from the very first glimpse into the district. According to Travel + Leisure magazine’s October 2011 survey, Times Square is the world’s most visited tourist attraction, hosting over 39 million visitors annually. It’s home to some of the most recognizable establishments today such as ABC, Hard Rock Cafe and of course Broadway.

Times Square is also known as “The Great White Way” for it’s millions of lights on the various billboards and marquees illuminating the area. The signs of Times Square congest the local streets in every size, shape and color imaginable. Today and historically it has been an advertising mecca which boasts some of the most popular brands in America. It’s reputation for producing over 1.6 million impressions a day has made the location the main source for these brands to communicate their presence. In 2008 Walgreens topped NASDAQ’s famous 11,000 sq. ft. LED billboard on Wall Street, with a 17,000 sq. ft. one. The sign is lit by over 12 million LED lights and spans 17 stories high, making it the largest digital sign in the world. Whether you plan to see a Broadway show or peruse the free light show on the streets of Times Square, it’s surely an entertaining corridor to visit.

I personally visited New York City in the wake of September 11, 2001. By far the most memorable sign I saw was the scrolling ribbon digital banners located on the ABC studios facade. As the events of the week were unfolding the sign continuously waved the red, white and blue of our American flag. It was a moment I will never forget, being surrounded by so many signs of Times Square with such a monumental message.

Though Metro Detroit doesn’t have quite the advertising impact as New York City, as they have proven  the right sign can certainly help your business’ recognition throughout our local area. Our team at SIGNARAMA is dedicated to helping you choose the right digital sign for your needs!